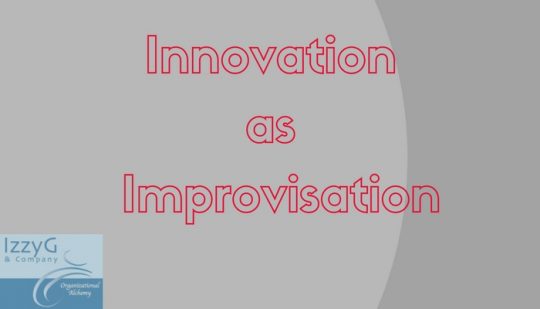 What would you call a person who can take something with a known use and employ it in an entirely new way? How about someone who recognizes a need and designs an effective solution? Most would say “inventor,” “originator,” “innovator,” or “creator”. But how about “improviser”? The skills that make Improv Theater participants successful are the same ones that innovators rely on. Improv may seem entirely spontaneous and, at times, a little magical to the audience. However, in truth, there is a method to Improv’s madness. Skilled improvisers create order out of chaos, reason out of nonsense, and harmony out of discord. It takes practice and a system to create something from nothing. In Improv, the framework that defines the system actually expands possibilities rather than constricting them. This is accomplished by allowing the participants to focus on the process rather than the outcome.

Whether the goal is to entertain or to innovate, four behaviors lead to success:

1. Focus on the present

Improvisers stay in the present. They resist the urge to plan ahead, evaluate, or anticipate what others will do. They respond in the moment and only to what is available to them within the context of the rules of the game. Likewise, successful innovators must keep their minds open and focused on what is happening rather than on what is expected or desired. An example is an Improv game called “One Word at a Time”. Players construct a story by adding one word each time it is their turn. The only way to succeed is to let go of the need to control the story or fellow players. When this happens, a story that has never been told before easily unfolds.

The basic rule of Improv is known as “yes…and”. This is a shorthand way to communicate that whatever is offered is accepted without judgement or resistance. The “yes” connotes acceptance; the “and” allows the next speaker to build on what was given and move the idea forward. It does not suggest agreement with everything offered, but it does imply willingness to accept it. For instance, while playing “One Word at a Time,” it is inevitable that a word will come that is unexpected or even unwanted. Rather than try to force an outcome, successful improvisers let go of preconceived ideas and thereby gain momentum toward the creation of something brand new. Innovators benefit from “yes…and” by learning that productive co-creation is fueled by sharing responsibility, being comfortable in taking risks and having unconditional acceptance of all ideas.

Once you accept an idea, support it, add to it, and help to move it forward. Avoid trying to make the “right” or best contribution. Improv Theater is like walking backwards. There’s a clear view of where we have been, but not of where we are going. For innovators, this construct is a helpful reminder that major innovations have come from taking one small step beyond what was. Something that at first glance seems like just a tiny step forward can be the catalyst to significant change.

Once an idea moves forward, let the outcome go. Improvisers know that it is futile to try to control the outcome of an Improv structure. They contribute what and when they can. They have high involvement in the process but low attachment to the outcome. This method of innovation, like improvisation, often has a significant end result without being able to point to who did what. The whole is much greater than the sum of the parts. If you want to see what innovation looks like in real time and in three dimensions, check out an Improv Theater group. There you will be witnessing constant innovation.