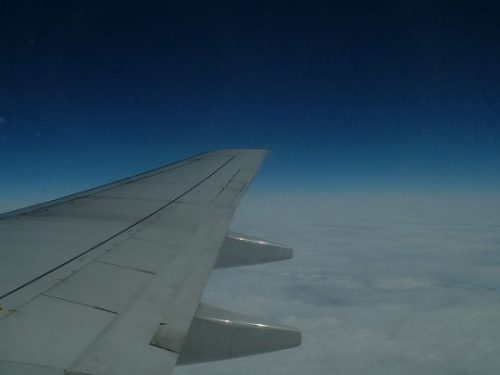 A few of years ago I was on a small plane flying from Chicago to Milwaukee. The plane ran into some heavy turbulence and starting bouncing through the air like a rock skipping over a pond. Every time the plane would hit a bump, I’d grip the sides of my seat, because I thought the plane was going to crash.

Every time the flight evened out, I’d relax. I happened to look across the aisle and there sitting next to his mother was a boy of maybe 6 or 7 years old. Whenever time the plane would hit a bump and I’d moan in fear, this boy would go, “Wheeeeeee”. And when the plane straightened out and flew smoothly, the boy would get upset. I remember him looking at the ceiling of the plane and in a giggling voice call out, “do it again!”

I realized that this boy and myself were having completely different responses to a situation where we both were being given EXACTLY the same information. Here I was, frightened for my life and the kid thought he was on a roller coaster. I was stressed and he wasn’t! I got so mad at him. Then I got mad at myself. I thought back to my college psychology class when I learned about the stimulus response theory; the S-R equation. Now, if a stimulus leads to a response, how come this bumpy stimulus led to several different responses? It must have something to do with that dash between the “S” and the “R”. That dash is where my belief about the stimulus comes in. In other words, my self-talk about the flight determined that it was dangerous. The kid’s self-talk was that this was fun.

Bingo! So stress is not an event itself, it’s our perception about the event as stressful! And stress is not a FACT. It’s a FEELING. Since we can’t always change the way the world works, our best shot at managing stress lies in our learning to manage the “dash”, that interval between the event and our belief about that experience.

As I struggle to keep negative stress at bay, I’ve come to realize that are only two kinds of events in this world- those we can control and those we cannot. And at any one time, we have only two choices. We can either act or not act. This concept is easily illustrated in a 4-part matrix, also know as the consultant’s dream whereby any complex idea can be easily broken into 4 quadrants. When you act on something you can control, we call that mastery.

When you act on something you cannot control, such as the weather, traffic jams or other peoples’ behavior, we call that ceaseless striving. Actually, I used to call that ceaseless striving until I was presenting a program for a group of kindergarten teachers. One of the teachers raised her hand at this description and remarked that this description reminded her of the gerbil in her classroom. An animal forever expending energy and getting nowhere. So I now I refer to acting on something I cannot control as “gerbilizing”. Nothing stops me faster from getting stressed than picturing a gerbil with mustache and glasses frustratingly getting nowhere. When you do not act on something you can control, that’s “giving up”. Sometimes that’s good, sometimes that’s bad. When you’re really busy and someone asks you to do something and you say, “I can’t. Talk to me later”, that’s good. You’re not acting on something you can control. If you’re given an opportunity to do something that’s a bit challenging and you are afraid and say no, that’s not so good. When you do not act on something you cannot control, that’s “letting go.” I believe the key to enjoying life is learning, as much as possible, to act on things you can control and let go of things you cannot control. This is what I mean by “managing the dash”.

I fly a lot. How do I control this particular dash about my stress around flying? I learned what turbulence is all about and that planes are built to take it pretty much in stride. I watch the flight attendants to see confidence in action. I do not leave home without telling my loved ones that I love them. I remind myself that driving is statistically more dangerous than flying so I’d really feel dumb if I got off a plane and was killed in a car crash leaving the airport.